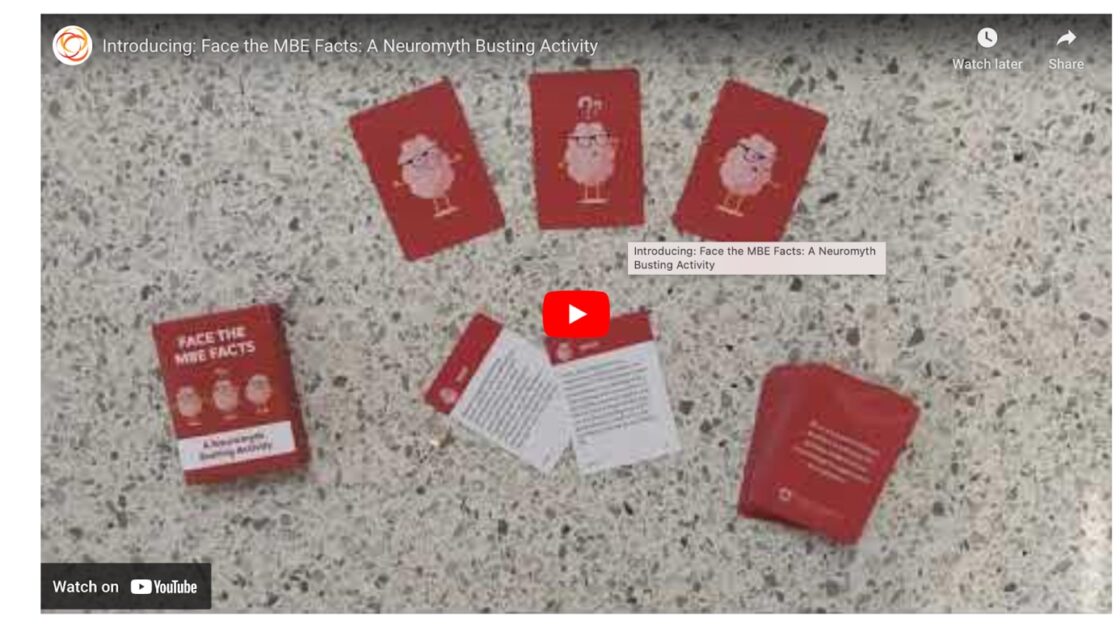 How well can you distinguish educational neuro-facts from neuro-rubbish? Eliminating learning-myths is one crucial aspect of helping every child reach their highest potential. It is a vital part of Mind, Brain, and Education (MBE). Your journey with research-informed teaching and learning begins here!

Read the red side of each card, decide if the statement is true or false, then flip over to find out.

Rewiring your brain to eliminate learning myths and neurorubish may take more than one game with these cards. So build in some spaced practice—put these cards in a place where you will come across them in one week’s time, and set a reminder on your phone right now to play the game again.

Warning, we wrote these cards to provoke discussion! Many challenge commonly held beliefs and statements out there in media. But all are supported by research.

We love to spread the word of being an evidence-informed supporter of your child’s education. So, if you are willing, please take a picture of you or your family playing with these cards and share it with us via Twitter (tag us @theCTTL) along with a sentence about what you learned, or email it to us: info@thecttl.org. We love to hear your stories!

If you have any suggestions for a new card to add to our deck, a learning myth you would love to see busted, or have thoughts of a new game to play with our cards, please send us an email.

Each card is supported by multiple pieces of research. The list below gives one citation for each card as a starting point for exploring more.

A review of research by leading expert Professor Dan Willingham:

More about the “learning styles” cards

We wrote these cards to provoke—and we know that some may distress, annoy, or frustrate you more than others. The two cards on the infamous “learning styles” myth, in particular, might be troublesome. Here are some details about that myth.

Teachers should not try to teach to the perceived learning styles of their students. There has been much research on this, and no study had found there to be a benefit from doing so—and there is evidence that it might hurt some students. Howard Gardner’s original work on multiple intelligences, which the origin of this myth is rooted in, did not propose this idea. There is no supporting evidence. But the myth just seemed to gather its own momentum and became a widespread belief. Howard Gardner himself is upset that his work has been warped this way, and wishes that people would refrain from propagating this myth. Instead, teachers should use a variety of modalities, letting their knowledge of the content determine which means would work best for the content they are teaching.