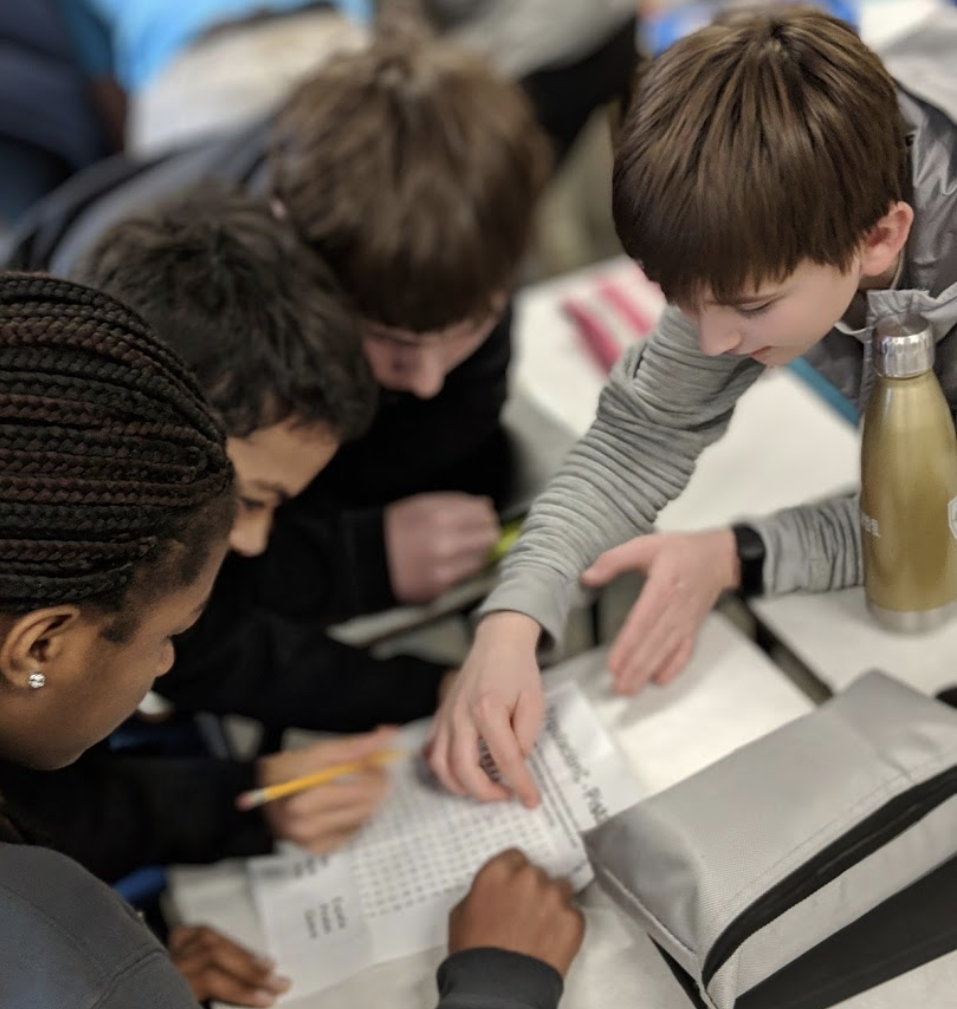 This guest post was contributed by Sra. Abby Díaz, Spanish Teacher at Park Tudor School in Indianapolis. All Park Tudor teachers read “Neuroteach” as summer reading in 2018 and are applying what they’ve learned to their teaching practice. Listen to Park Tudor’s 360 Podcast to learn more about their efforts to bring Mind, Brain, and Education Science to their classrooms.

Park Tudor middle school students love to read. However, reading a novel in their world language class could be, for some, a stress-inducing endeavor. Given that reading is the most powerful, research-based way we receive language input, our World Language department uses novels that are “strategically written with a manageable number of unique words, making them highly comprehensible to even novice-level students” (fluencymatters.com). Earlier this year, my seventh graders read Piratas del Caribe y el Mapa Secreto by Mira Canion and Carol Gaab (2008), which became an opportunity for me to apply strategies I gleaned from our faculty summer read, Neuroteach, by Glenn Whitman and Ian Kelleher (2016). Specifically, I wanted to discover the components in each element of the formula presented in chapter 8: Memory + Attention + Engagement = Learning. As a result, I discovered a formula for one specific element, Engagement. Using this formula, our classroom community transformed into pirate crews ready to “battle” in Spanish each day, leading up to our grand finale: a Breakout Box treasure hunt!

First, I began reflecting on my students’ unique personalities, interests and social-emotional needs. This year’s seventh grade cohort encompasses a dramatically wide range of all three, so I knew that I needed a way to validate and honor each student’s individuality while weaving together these differences into a collaborative, motivated whole. For that reason, I requested students’ feedback regarding what activities they enjoy when reading a class novel, and what experiences they have had with classroom readers. The results from this informal poll were fascinatingly unified around a few points:

And become pirates we did! I split each class into three pirate crews and crew members chose their pirate identity and crew job through ‘pirate orientation’. The crews created names, banners and enthusiastically rallied around their members for the rest of the unit. In this way, I gave learners a preview of important vocabulary and language structures embedded in the novel while also encouraging them to self-reflect on their personality and interests in order to identify how their unique role contributes to their community: captain, warrior, doctor, musician, navigator, cook or quartermaster.

Not only did the above poll give me excellent information to create learning activities based on student choice, but it also seemed to enhance students’ intrinsic motivation since we now shared ownership of the plan. Indeed, I strayed from my lesson plans a few times when students requested to demonstrate their learning in a different way, or when they needed me to deliver language input differently. For example, instead of simply reading a chapter, students acted out the drama with props or- when learners found a chapter challenging- I would storytell the passage while illustrating important details on the whiteboard. In other words, by allowing for flexibility in the delivery and practice of learned content I was able to keep the pirate crews engaged and excited for the next battle.

The battles, in reality, were formative assessments to earn points for their pirate crew, rather than a grade in the gradebook. Mainly, students tested their knowledge for points via Kahoot!, Goosechase, and recall chart quizzes. Each activity- scored as a group or a total of each members´ score- drove healthy competition. It also allowed me to observe student learning and respond to particular needs regarding the content being learned or social-emotional issues. For example, every Friday the pirate crews took a formative quiz- individually for a few minutes, and then banding together in their groups. Previously, I had only collected one paper from each group for points, which prompted many students to not do any work at all since ´It didn’t matter anyway´. Reflecting on this, I was reminded by the authors of Neuroteach that learners benefit from a high volume of formative (i.e. not in the gradebook) assessments and ´knowing that effort matters most´ (p. 27). In an attempt to validate the effort of every pirate, then, I decided to collect and add points to the crew’s total for each pirates’ correct answer. Not surprisingly, many pirate crews rallied to help their peers complete all the questions correctly.

In contrast to a pencil and paper approach to formative assessment, another team-based activity that students love is Goosechase – a digital scavenger hunt app. Although Goosechase is traditionally used to find an object and submit a photo, video or text response for points, it is the perfect technology for repetition of key vocabulary phrases while allowing groups to create and submit their own interpretation of these structures. In particular, chapter 6 of Piratas del Caribe y el mapa secreto is full of action- ships battling on the high seas, exhilarating sword fights, and a rapid exchange of dialogue- that seemed to confuse some students the day we read the chapter in class. With this in mind, I simply copied short chunks of text into the Goosechase missions for crews to recreate visually (see images below). On the whole, it is easy to determine if a pirate crew understood a prompt, and just as easy to give immediate feedback and support by typing a comment on their submission. Again, these scores were added to each pirate crew’s grand total.

Finally, the week before spring break, students went on a treasure hunt! Using the Breakout Box resources available at Park Tudor lended an air of authenticity since there was a real treasure chest with real treasure (i.e. candy) inside!  Each clue was a puzzle that required the groups to recall and interpret key events and characters from the novel. Both seventh grade classes opened the treasure chest, and truly had fun in the process. After all, students – and teachers, I believe – need multiple opportunities to play, a research-informed strategy also put forth in Neuroteach.

Overall, my students benefited from the strategies I applied in this unit, in regard to their language and social-emotional development. I observed students working with the text at a high level of proficiency upon returning to the Piratas novel in preparation for their final exam. Likewise, I have noticed some kind and supportive peer-to-peer interactions between former pirate crew members. Admittedly, there are many things I would change about this unit for next year, but purposefully utilizing the ideas in chapter 8 of Neuroteach certainly began my journey in the right direction.

The Value of Mind, Brain, and Education Science from a School Leader’s Perspective

Teach Me and I’ll Teach You: Learning as an Equitable Exchange

The Science of Forgetting and the Art of Remembering (Part II)