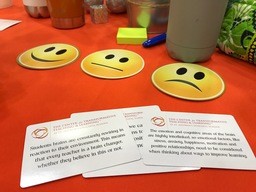 Editor’s Note: Periodically, the CTTL receives guest blog posts from teachers and school leaders who experienced one of its in-person programs. Jessica Clingman and some of her colleagues from the Princeton Day School in New Jersey participated in the 2018 Science of Teaching and School Leadership Academy and we are excited about how she took that experience back home to her school and most importantly to her science students. Enjoy this share.

After reading Neuroteach during a faculty book club at Princeton Day School in Princeton, New Jersey, I knew I needed to attend CTTL’s Science of Teaching and School Leadership Academy in the summer of 2018. In addition to that, I was certain my students really needed to know more about their brains. I asked around in my Middle School science department. Was anyone teaching how the brain works? Could I? Could I change my curriculum for 5th-grade science and do just that?

So, I found myself at the St. Andrew’s Episcopal School in July of 2018, surrounded by leaders in the field of Mind, Brain Education. We dissected brains, went to Johns Hopkins University to see research in action, collaborated to create our own research for our classrooms in the upcoming school year, and learned a lot about how our brains learn and process information.

One roadblock to learning about the brain turns out to be neuromyths, facts about the brain that we assume to be true (but really have no backing in science and research at all). To bring this concept into focus for us, CTTL had all the participants at the Academy engage in a Face the MBE Facts: A Neuro-Myth Buster Activity. In our table groups, we received a pack of Neuro-Myth Cards. We were asked to read them, discuss them, and then decide if research showed these statements were true, false or indeterminate. There were emoji cards representing these three options. The cards were deliberately written to provoke discussions and debate. Of course, after we thought we had completed the task, we were surprised to find out that there was no neutral option and we had to sort those cards again!

Back at the hotel for the evening, as I processed all the amazing revelations from the Academy that day, I knew I needed to bring this same myth-busting learning experience to my students as a part of the new 5th-grade curriculum. But the Neuro-Myth Cards were written for teachers, not for 10 and 11-year-olds. So, I had some work to do.

First, I gathered the cards from the conference, my well-worn copy of Neuroteach especially chapter four and its section on neuro-myth busting, and the online version of a formative assessment. I choose the neuromyths that I thought my students might already have. I rewrote the neuromyths for my younger audience. I changed “avoid having students memorize information since this is an outdated strategy” to “memorizing things is a waste of time” and simplified “hemispheric dominance in the brain means some people are dominantly left-brained (more analytical), while others are dominantly right-brained (more creative)” to “people are either left-brained or right-brained.” Some, like “we only use 10% of our brains,” were great just as they were written. I printed the myths on shipping labels and adhered them to index cards to create four sets of cards for my classes. I color copied the emjoi cards we had gotten at the workshop so I had enough for each group.

On about the fourth day of our brain study, I began my own Middle School Neuro-Myth Buster Activity. The students were given the exact same instructions, with the neutral emoji included as an option. I heard some comments like “oh yeah, I read that you do only use 10% of your brain” telling me that some of these neuromyths were already present in these young learners, but I also heard a lot of confidence from my students in the idea of neuroplasticity and that their brains can change. There was an audible groan when they realized they would have to sort the neutral ones again, and the students definitely had a harder time agreeing on where the neuromyths belonged than my colleagues at the conference did.

The biggest change I made in the instructions was that I did not give the students the ability to self-check. The original cards had the answers on the back. I thought this might be a little too tempting. So instead, I created a Google slides reveal, so the students could get feedback after the activity about the choices they made. This method allowed us to debrief as a class and led to some edifying discussions. Our most rigorous one was over male and female brains being significantly different or mostly the same!

The wonderful take away from using this lesson is that young students do not have as many preconceived myths about the brain as some adults do. This strengthened my belief that teaching them about how their brains work and learn is the crucial work of a teacher at any age level, but especially those of us who work with younger students. The earlier they learn about brain science, the fewer of these myths they will presume to be true.

If Jessica’s experience inspires you to pursue this professional development opportunity, learn more about the weeklong Science of Teaching and School Leadership Academy or email academy@thecttl.org.

Metacognition in Action Across Disciplines