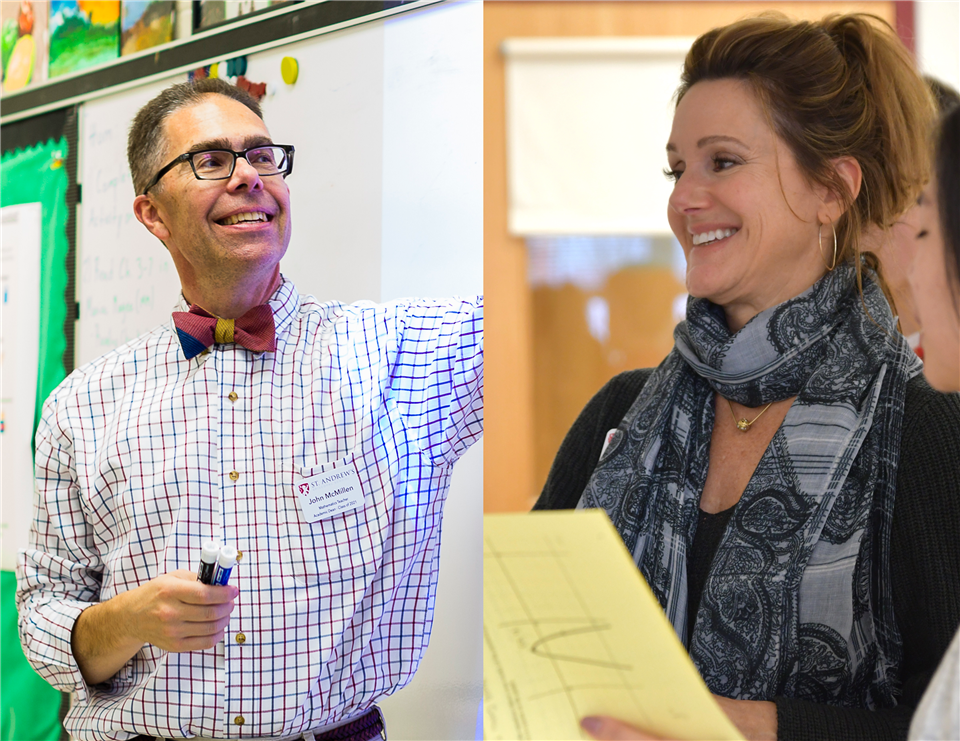 Math teachers Karen Kaufman and John McMillen will present at this weekend’s researchED conference in Philadelphia, sharing their experience reinventing how they introduce and cover their course content.

Based in the United Kingdom, researchED convenes conferences around the world that bring researchers, educators, and policy makers together to bridge the gap between research and practice.

Over the past two years, Kaufman and McMillen have taken Mind, Brain, and Education Science research on memory and applied it to how math classes are taught at St. Andrew’s. On Saturday they’ll discuss how St. Andrew’s teachers introduced spaced repetition by assigning students weekly review packets throughout the school year.

Kaufman said she was inspired to incorporate spaced repetition into her teaching after learning about Ebbinghaus’s “forgetting curve,” which suggests that the greatest decline in memory occurs within the first days or even hours of learning a new topic. She quickly realized this phenomenon explained why her students were surprised by what they saw on her final exam review packets.

“I felt like the year went great, and then I put down the final exam review packet and just waited,” she said. “Every year, students would say, ‘Is this on the final? Did we ever learn this?’”

Kaufman ensured each topic covered in a class appeared in the weekly review packets, and the result was transformative, she said.

“If you do a few problems a night, if you stick with this, it’s going to make the difference at the end of the year,” she told her students. “At the end of the year I handed out my (final exam) review packet. The kids looked through it, and said, ‘Wait, this is all that’s on our final?”

Kaufman and McMillen will share examples of the review packets as well as “The List,” which indicates what math concepts and skills students should know before they begin a new course. The List has also inspired a new approach to summer work; rather than give students specific math problems to solve, they are instructed to look at The List for their class and use an online tool like IXL or Khan Academy to practice skills that need review.

Teachers do not yet have quantitative data to show the impact of these changes, but Kaufman said she has seen the difference in how students approach their math classes.

“They all felt really good – good going into the final, good leaving it – and I feel the kids going through these courses who are used to this constant review have a stronger algebraic foundation,” she said. “I think it’s doable (for teachers). It’s not easy, but if kids leave a course and feel more confident, then it’s worth it.”

Glenn Whitman, Dean of Studies and Director of the CTTL, invited Kaufman and McMillen to present with him at researchED. He called them “models of the journey of the research-informed teacher” and said he believes they will inspire attending teachers and school leaders to bring research into practice.

“They are veterans who are already highly successful with their students, but they saw the opportunity to leverage research to embed their rich mathematical content for the longer term using how much more we know about memory and how the student brain learns,” Whitman said.

McMillen said he hopes the researchED audience comes away with the confidence to jump into implementing new teaching ideas, knowing that some strategies may not work out.